A response to: Signing up for Twitter shows why the company is struggling to grow

I recently read an article breaking down Twitter’s onboarding flow and found myself  initially agreeing with most of the points presented throughout the article. I, like the author, use Twitter on a daily basis, and have found an enormous amount of value in it. I also had recently created another Twitter account and found the onboarding process to be less than ideal.

However, the more I thought about the points presented in the article, the more I found myself disagreeing with the author. I believe there’s some really valuable nuggets of learning we can extract from this article, so let me dive in and explain.

I’ve been using Twitter for a number of years now – since late 2008 – so I’m well entrenched in using the network as part of my daily life. I love Twitter. It’s a great way to meet people, discuss common interests and things as they happen. It’s the new water-cooler, and it’s a great place to hang out.

The author makes it clear that he signed up for Twitter several years ago and enjoys the service. What’s the problem?

Twitter’s onboarding is created for new users, not people that have used the service for several years.

It’s extremely tough for people to put themselves in a beginner’s mindset. As a result, the opinions the author has (definitely legitimate concerns), are wildly different from that of a new user.

Takeaway: If you’re a marketer and are working on improving an onboarding flow, make sure to find those beginners and get feedback. This is crucial.

What is it that we don’t know?

I had a professor who constantly highlighted that the biggest challenges in business decisions are things you are unaware of. That’s why he suggested we ask “what is it that we don’t know?”

I asked myself, “what do Twitter employees know, that I don’t know?” and is pretty obvious:

That leads me to the conclusion that my opinions of how the Twitter onboarding flow should be constructed are useless. There’s many nuances that I’m unaware of, and therefore, I don’t believe that I can provide meaningful insight vs. a Twitter employee with more context.

Takeaway:  Don’t give specific advice to people who have more insight than you do. Instead, ask questions and let people to make their own conclusions.

But lately there’s been a series of stories about why Twitter is in trouble. Its user growth is flatlining. Executives are leaving the company. People aren’t joining Twitter as quickly as they were supposed to.

Twitter is definitely under quite a bit of pressure from Wall Street to grow its user-base, but happens if Wall Street is focusing on a vanity metric?

Growth is a double-edged sword

Oftentimes the more important metrics are ones that are further along in the user lifecycle (freemium to paid, churn, etc)

Takeaway: Find a metric that matters and improve it, but expect to make sacrifices along the way.

There’s been quite a bit of discussion around the “aha moment.” This is essentially a point in time where the user discovers the core value that your product delivers and is hooked. The author makes a great point (below)

I can see why people struggle to join Twitter, now. It’s easy to go through these steps, end up following a bunch of famous people and then just be tweeting into the abyss with nobody to interact with. That’s no fun and makes it seem like a huge effort to get started.

I signed up for Twitter in 2009, and barely used it for two years before finding my aha moment. Once I started following thought-leaders in industries like marketing, it was great. There’s much less noise than networks like Facebook, plus it helps me stay up-to-date with the latest news.

Takeaway: Twitter is intentionally forcing users into having an “aha” moment. It works for some, but not for others.

The problem with Twitter is the mechanism for making friends is different. On Facebook, you stick to people you know and friendship requests are mutual before you start interacting. On Twitter, you interact with people you don’t know, and the friendship doesn’t have to be mutual. This is a good thing, but can be scary at first.

This is dead-on and I couldn’t agree more. Twitter has a bit of a learning curve compared to other social networks, but one major advantage Twitter has is that it’s deeply engrained in media, especially television.

I’m pretty optimistic about the future of Twitter, but its onboarding flow isn’t the biggest problem.

A/B Testing: a comprehensive guide to getting started

How the internet is creating a new currency 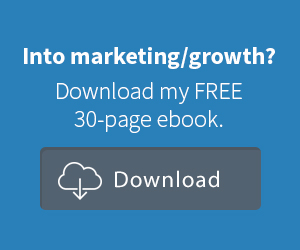